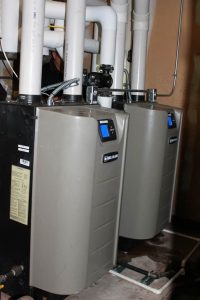 CHICAGO, IL – July 14, 2016 – A medical center in Chicago required a quick and efficient remedy to nurse its aging and failing boiler heating system back to good health. The newest high efficiency condensing boilers from Weil-McLain provided the medicine needed.

“We had several issues with controls, the boiler was leaking, and we had to place multiple services calls to keep it operating effectively,” said Latas. “We were exploring grant programs for energy savings projects, such as boiler replacement, and that’s when we were approached by Carl Wigginton.”

“Presence had an old 1 million BTU atmospheric steel tube boiler that was only functioning at maybe 700,000 BTUs,” said Wigginton. “Additionally, it was leaking and was strictly an on/off boiler that was wasting energy.”

Latas’ wish list included installation of an energy efficient system that offered Modbus communication so the facilities technician could remotely access the boiler through the building automation system (BAS), view the status and determine how the system was functioning.

Wigginton recommended that Presence participate in a field trial for a condensing boiler that had just hit the market: the 95% AFUE Evergreen™ boiler from Weil-McLain.

The Evergreen features advanced technology with simple controls, flexible functionality for multiple applications and a durable design, and is easy to install, use and maintain.

The unit is adaptable for most heating needs including light commercial or large residential applications and for single or multi-boiler installations.

“The old atmospheric boiler was piped in series with the system, and when it was running it was about 65% efficient, versus the Evergreen that is 95% efficient,” said Mike Gambill, commercial specialist at Weil-McLain, who helped manage the project. “Because they were continuing to flow water through the boiler when it was not firing, it essentially became a radiator that robbed energy from the system and sent it up the chimney.

“When you run water through a boiler that’s connected to a system but not firing, it’s extracting energy from the system,” added Gambill. “It’s often not measured, but we refer to this as off-cycle losses.”

To improve heating efficiency, both Wigginton and Gambill recommended piping two 399 Evergreen boilers primary-secondary so the boilers are hydraulically disconnected from the system when not operational. Primary-secondary piping offers a simple way to inject heating energy into a system regardless of the flow rate in the heating system main piping. This flexibility and simple operation make primary-secondary a very popular configuration for piping boilers.

Boiler Installation and Specifications
The Presence Health facility consists of a main air handler and approximately 22 variable air volume (VAV) boxes that open or close based on the specific reheat demands in a particular space of the building.

“With 22 VAV boxes, the 1 million BTU boiler was constantly turning on and off or short cycling,” said Wigginton. “The two Evergreen boilers feature full modulation firing with up to a 10 to 1 turndown. Thus, one boiler is able to modulate all the way down to the smallest load or as low as 10% of a single boiler. This keeps short cycling to a bare minimum because the unit can match the required load with the least amount of fuel.”
Boiler turndown ratio is: the maximum heat output reducing to the minimum level of heat output at which a boiler will match the heat load efficiently.

“The Evergreen units are ideal for an application such as Presence Health with 22 VAV boxes,” said Gambill. “Evergreen boilers have a maximum turndown of 10 to 1 each. We found that further turndowns beyond this ended up with more energy in the flue than in the heating system.”

Installation Challenges
The first installation challenge was removal of the old, heavy boiler, which had to be disassembled in pieces due to its size and weight. Before removal, Wigginton recommended flushing the old system while the atmospheric boiler was still in place to clean the pipes.

With flushing and removal complete, the two Evergreen units were placed on a hand cart, rolled into the facility’s elevator, through a standard doorway in the mechanical room and were placed on the same concrete pad as the original boiler.

Converting the system to primary-secondary piping required some piping modifications. Murphy & Miller removed the old boiler and cut the piping that was in series and connected the headers with two closely spaced tees, creating a primary-secondary connection for the boilers.

The intake and exhaust were then vented through the roof, using the same chimney that was utilized by the atmospheric boiler.

The Evergreen boilers also were installed with a built-in sequencing controller (with lead-lag rotation) that was converted from Modbus® to BACnet® to fit the protocol of the building automation system.

Additionally, the boilers were set up as a lead-lag system to avoid one unit running more than the other. The units were configured to rotate lead every 24 hours to the next boiler.

“Installation took about two weeks to demo, cut out, re-pipe, install and operate the new boiler,” said Wigginton.
“We’ve partnered with Carl Wigginton and Murphy & Miller for years,” said Latas. “Carl is a terrific service manager and provides excellent support, and they are a great company to work with.”

A Clean Bill of Heating Health
Presence Health has experienced several benefits as a result of the heating system overhaul. One, is reduced fuel expenses.
“We’ve experienced energy savings by replacing the standard boiler with higher energy efficient units,” said Latas.
Another plus, according to Latas, is the reliability of the units.

“We didn’t have a single service call on the boilers through all of last year’s heating season, which says it all for the quality of the units we installed,” added Latas.